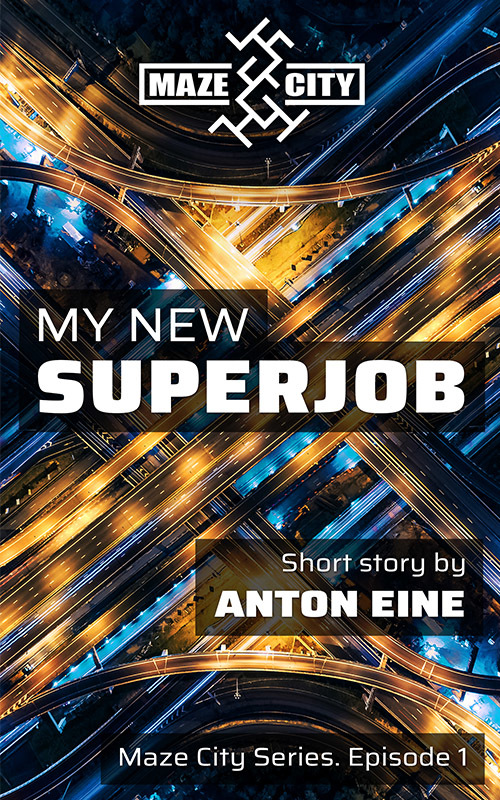 Have you ever wanted to be a superhero? The city's defender against crime, violence, and all sorts of sicko nastiness?

When one day she stumbled upon a strange help wanted ad claiming that the city was looking for a superhero, Samantha Washington, a former Ranger commander, was sure it was a joke. She sent in a resume anyway.

Will the ad turn out to be somebody's dumb idea of a prank, a practical stunt, a cunning maniac's clever trap, or... a real opportunity leading to a difficult and dangerous future occupation?

Now that she has allowed herself be drawn inextricably into a whole chain of strange events, Samantha will have to figure it all out on her own. And she’ll have to do it face to face with her own deepest fears.

I wasn't sure what to expect going in, but I was delighted by what I found. This is a quick, easy read that introduced me to a character I definitely want to know more about.

Yeah, she seems a bit too skilled for certain things, but her deficiencies will make up for I think.

I also enjoy the author's thoughts on how cities very well could turn to looking at unexpected ways to handle rising crime in the future. Do I think that this particular way is a possibility? No, not really. However with the current MARVEL MCU rolling, who knows who could buy into that crazy and try this stuff themselves.

It's pretty well written, quick, gets straight to the point, and crafts a good couple of characters. Recommended.

Review by Georgia Rose of georgiarosebooks.com

This short story is basically an interview, but one with a difference. Taking place in an unusual setting, which is very well described, Samantha meets Mark who tells her he’s something of an expert in human resources.

What follows is unusual in terms of an interview and revealing in the questions asked and answers given.

I liked it a lot. There was great insight into the characters and the story ended very well so that it was finished off nicely but the reader is left wanting to know what happens next.

Fortunately there is a next as this is the beginning of a series, a promising one at that.

My New Superjob is a completely different kind of story: edgy and a little dark.

Sam Washington turns up at an apparently deserted warehouse for a job interview with a difference. But does she really want to be the superhero the city needs and deserves?

Sam’s character is incredibly engaging. She is sharp-tempered, quick-thinking, foul-mouthed, suffers no fools and takes no prisoners. She is a bit of a badass.

It makes complete sense to the reader that she would have struggled to hold down any sort of a normal job, and so it's lucky really that she has been presented with the opportunity for an abnormal one.

Originally intended as a standalone short story, I am in full agreement with Anton’s wife who insisted that this was merely the opening act of Sam’s adventures in Maze City. I also need to know what happened next!

Review by Karen Oberlaender of My train of thoughts on…

This book focuses on an interview between “Mark” and Samantha, the latter being in dire need of a paying job.

With “My New Superjob”, Anton Eine has created a very funny short story with more than a superhero touch. The story was initially planned to be just one short story – this would have been our (the readers’) loss. This short story comprises two believable characters with sufficient depth and hilarious dialogue. I had a great time reading “My New Superjob” – it is a very fun read. I was drawn into the story right away, getting closer to Samantha, page by page. I am looking forward to reading more!

This is for you if you like female protagonists, great – and fun – dialogue, as well as the superhero topic.

A fun and somehow suspenseful short story to read again; it is the very promising first in a new series.

It was a squalid, nasty-looking place, and I wondered, not for the first time, what the hell had made me come here at all.

The warehouse stood in a deserted lot. Around it was nothing but emptiness and dereliction. The ground was littered with rubble and garbage, and up through the surface of a great reeking puddle glimmered the reflection of a pallid moon sluggishly emerging from behind smoky black clouds.

The warehouse itself appeared long abandoned – a ramshackle affair, mainly rust and grime. Perfect for a drug den, or maybe a drug dealer’s HQ. In a cheap horror flick, this would be just the kind of place they'd put the demon spirit or homicidal maniac.

Any minute now some damn zombie hand’ll come bursting out of the earth now to pull me underground. Or some giant psycho in a soiled leather apron could suddenly spring up behind me, an oversized axe in his hands, blood dripping from its chipped blade.

Ugh, you and your hyperactive imagination. I huddled into my jacket and cautiously approached the warehouse, always looking underfoot to avoid stepping into some unidentifiable kind of crap. Although this whole thing really stunk to high heaven. So maybe I had already landed in a giant piece of crap, at least metaphorically.

The door wasn't locked. Rusty hinges squealed in overloud protest as I pulled it open. The sound echoed through the darkness of the vacant interior, fading out in the far-off dusty corners where the darkest shadows were gathered.

“Lovely place you've got here,” I muttered through gritted teeth. Then, louder: “Hey! Anybody home?”

There wasn't much point trying to light the huge vault with my phone, so I pulled the powerful LED flashlight from my pocket. Just for good measure, I checked that the knife lay in its place under my right hand. The heavy slab of cold steel calmed my nerves a bit. Whoever was in this warehouse, I had a few compelling arguments ready if a difference of opinion should happen to arise.

I set the flashlight to wide dispersion, flipped it on, and warily guided the white cone of light across the contours of the warehouse interior. It was a large, empty hangar with the remains of industrial shelving on one of the walls. All right, then. Hooks hanging on chains from the ceiling would have been a bit much, anyway.

Closer to the middle of the warehouse, the beam of light caught something dark, and I directed the flashlight that way to get a better look. It was a table – a modern table, clean and obviously new. On the table were papers of some kind and a still-steaming coffee mug.

“Hey! Anybody home? What kind of stupid game is this, motherfuckers? You think this is funny, do you?”

I went over the walls again with the flashlight, but there didn’t seem to be anyone around. It wasn't impossible, I decided, that this was all a con job or even just some kind of crazy prank. Or bait set for simpletons and suckers by some ingenious madman in this godforsaken corner of nowhere.

I was certain now that something really was going on here, but it could still be a set-up. Someone had been here - only a few moments ago. Maybe I spooked them when I came in. Or maybe someone was still here, hiding somewhere, waiting in ambush. Or homing in on me with some unpleasantly lethal something or other.

I slowly walked up to the table and examined the slender file folder lying on it. On the plain manila paper, in thick magic marker lines, was written my name.

So, they were expecting me. But where...

“Son of a bitch!” I blurted out before regaining my self-possession when a bright pillar of light shot down from the ceiling, illuminating me and a circle around the desk about six feet across.

“Miss Washington,” came a soothing male voice from behind me.

I took a quick step forward and turned around, putting a little distance between myself and the owner of that voice. Gripping the titanium casing of the flashlight tightly in my left hand, like brass knuckles, and shining its light in the man’s eyes, I shot my right hand into my pocket, where the knife lay.

“There's no need for that, Miss Washington," the stranger said calmly, raising his empty palms in front of him to show that he had no weapons and to shield his eyes from the bright beam of my flashlight, "I'm unarmed, as you can see. And forgive the dramatic effects, but I wanted to see how you would react. Professional curiosity and all, you know.”

A tall white man, between forty-five and fifty, with an open, strong-willed face and short-cropped hair streaked with gray. The simple gray suit did nothing to hide his military carriage and athletic figure. Even unarmed, he might be dangerous.

“Me? Nobody. I’m not even here, as it happens. And neither are you. This place itself, in fact, doesn't exist. And this conversation never happened. I presume we understand each other?”

“Good. And if you do ever decide to allude to our nonconversation in the future, my employer will deny it by all means at his disposal.”

“Excellent. Please be seated, then, Samantha. May I call you Samantha?” the stranger asked, indicating the simple metal chair by the table.

“No. Unless you come up with a name for yourself, at least for the duration of the conversation we’re about to not have,” I grumbled, sitting in the proffered chair and again surveying everything around me in the light now pouring down from the ceiling.

The man gave an understanding kind of smile, moving only the very corners of his lips, and at the same time furrowed his eyebrows. He took his seat on the other side of the table.

“Right to the point, Samantha. I like that. And I promise you to be as open and honest as possible - within reason, of course. Coffee? Or water, perhaps?”

Are you sure you want to close the window of book download and sending it to e-mail?

If you did not download the book in one of the formats available and did not send it to your e-mail, after closing this window you will not be able to return to these options.