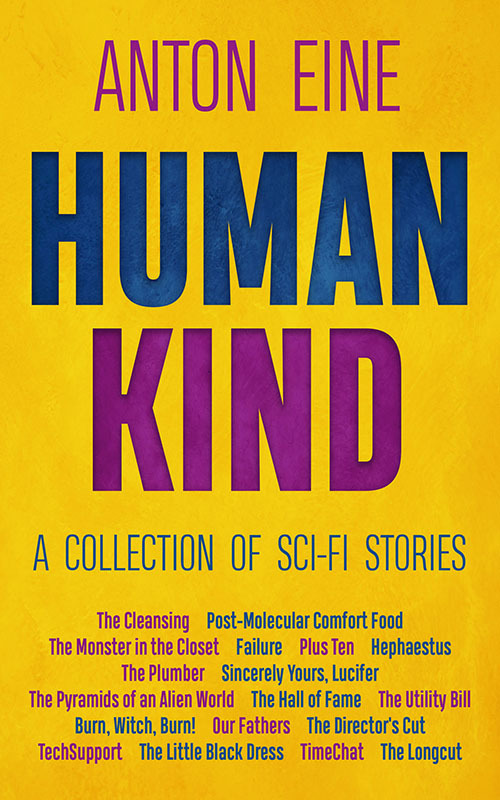 A collection of sci-fi stories

Anton Eine's “Human Kind” is a thematic compilation of science fiction short stories dedicated to questions that have concerned humanity throughout time. Who are we? Where do we come from? What awaits us? Are we alone in the universe? Why can’t we travel in time or divide by zero? What does it mean to be human? And of course – what are we here for?

This collection comprises works in various formats – from flash fiction and short stories to novellas. Funny and witty, kind and appetizing, sad and sometimes tense and disturbing. They are also presented in various different styles ranging from traditional narratives, monologues and memoirs to modern stories in the form of pure dialogue, chat messages or an email thread.

The confession of a fallen angel, the ruthless business practices of corporate aliens, Napoleon in the heat of a decisive battle, experiments on human beings, role-playing games on a planetary scale, fantastic culinary competitions, unexpected future fashions, witch hunt, mysterious disappearances, monsters under the bed, temporal paradoxes, cosmic archeology and the artefacts of extinct civilizations – all this and much more can be found in Anton Eine’s “Human Kind”!

The paperback and hardcover editions of the English version are available on Amazon.

Review by Hannah Reads of Pages, Places and Plates

My first introduction to Anton Eine was his short story The Cleansing. It taught me two things about him – he’s excellent at writing twists, and he sees no limits when it comes to fiction. Both positive things! I then read Post-Molecular Comfort Food, as bizarre as the title suggests and another wonderful short piece full of imagination. And finally, I reviewed Plus Ten, a curious short story with a concept many gamers will find of interest.

Eine’s writing mind is an interesting one, and I did wonder if reading many of his short stories would lead to them becoming a bit predictable. It can sometimes become the case with authors, as they can use the same formulae and structures. I was nicely surprised to find out that this was not the case with him. Somehow, he manages to create complete surprise within every story (even if you’re trying to think like him!). The twists are so leftfield and bizarre, too, often throwing the entire story on its head. It’s a great device, as you’re then left wanting to read the whole story again with your newfound perspective.

Each story fits within the sci-fi genre, but on quite a broad spectrum. Some stories take place in space, others in the future, and some just have some sort of sci-fi element to them that makes the world different. I feel like the setting for a lot of the stories comes from Eine thinking “Imagine if this were the case instead…” – so much imagination goes into each one, and they ponder over quite curious situations. They’re largely looking at humanity through different lenses – ones we might not even have considered.

Some of the environments were so interesting that I really wanted to read more from them. Without giving them away, stories like The Plumber and Tech Support had the most fantastic ideas within and really got me thinking about life on our planet. Other stories, like Utility Bill and Little Black Dress, completely turn life as we know it upside down. And one of my favourites was simply entitled Failure… I can’t tell you anything about it because it will give it away, so you’ll have to trust me when I say that it’s such a clever and brilliant piece of prose.

I liked the cover – simpler than Eine’s usual choices, but it works. There were a few typos as a I was reading which was slightly distracting, but this can be something that occurs with translated texts. Most of the stories take under ten minutes to read, with some only a few pages long. The longest one actually accounts for a quarter of the text, which took around 45 minutes to read, and I actually really liked ended on something a bit different. A world that could be more expanded on. It’s hard to choose a favourite story as I really did enjoy all of them!

Human Kind has a solid recommendation from me. I felt a greater connection with the author, being able to read many of his stories in one collection, and they truly show the capabilities that he has as a writer. I definitely enjoyed some more than others, but every story is at least good at some of them are truly excellent. There is such a great range of themes – philosophy, religion, and much more.

I’m not even a massive sci-fi reader but I loved the collection as a whole. For anyone that does read sci-fi a lot, this is a must-have for your bookshelf.

This collection of short stories contains eighteen separate and unique instalments for lovers of science fiction! The stories are not arranged thematically and are each treated as their own tale. I really enjoyed reading this collection over a cup of coffee in the morning, tackling around one a day, though you could read a few of these in one go and enjoy the experience.

Eine is an author who loves to play with themes, he clearly puts a lot of thought into what he wants each story to say. I found that this collection consistently subverted my expectations and I enjoyed seeing some unique perspectives, the story called 'The Monster in the Closet' was one of my favourite stories that contained a voice that would usually go unheard.

Eine is experimental in his writing style and in some stories he chooses to use only dialogue with no dialogue tag. This would usually make a reader panic but Eine manages to pull off this stylistic choice almost effortlessly. The dialogues are easy to follow and the themes are intriguing.

I recommend this book for readers who enjoy experimental styles, interesting twists and turns, and complex themes and morals. Eine litters some of his stories with religious allegory which was a delight to uncover because some of the crucial dots don't get connected until the end. I have a religious background so I particularly enjoyed these little hints and nudges towards our religious and world history.

A collection is always hard to rate as a whole, I enjoyed some stories more than others but thoroughly enjoyed the whole collection. My favourite stories were The Cleansing, The Monster in the Closet, and The Pyramids of an Alien World, but that's only if I have to pick three.

I must, of course, give credit to both the author and the translators to create these great pieces. If you wanted to add more translated fiction to your list I would have to recommend this one.

Human Kind by Anton Eine is one hell of a Sci-Fi book and I was hooked right from the start.

Anton has a way of weaving the story that could leave you wanting for more, and the story themselves are candy for both the brain and the tongue. I had a great time reading the book, and I just want the same for the rest of the readers out there.

In the book, Anton takes us on a journey to the future and shows us what could be. No disappointments there.

I was delighted to buy Human Kind recently to support Anton Eine, a Ukrainian author. I have read and reviewed his work before so was only too happy to read more, and I do love short stories.

As is always the way with a book of short stories there are those you like more than others. My favourites were: The Cleansing, Post-Molecular Comfort Food, The Monster in the Closet, Failure, Hephaestus, The Utility Bill, TechSupport, TimeChat and The Longcut.

Eine writes very well indeed and has some brilliantly clever ideas. I thoroughly enjoyed this collection of sci-fi stories and highly recommend them to anyone looking for something entertaining and interesting to read.

I wish I could read Ukrainian. I loved the stories in this book. Unfortunately I have no idea what was lost in translation. But as they are they are probably some of the most thoughtful ideas I have read put into story form. I recommend this to everyone that reads. Looking forward to reading more from this man.

Review by Amazon Customer Fishhooks and plot twists, all in a row

Fishhooks and plot twists, all in a row

A fishhook serves to keep the hooked item from getting loose, and is part of the structure of creating a story. Plot twists are a method of making the story change direction, so you don't wind up where you thought you would be.

Telling a story and using plot twists and fishhooks to keep the reader on the page, and in the story gives the reader a book that captures attention. That is what Anton Eine did in this volume, changing and resetting the methodology from story to story. The first part is to make the story interesting enough you just want to see how it gets to where you know it is heading. Simple, right? You are reading, it is a plain, simple, ordinary story and it suddenly takes a plot twist and goes someplace you were not expecting.

That is brilliant writing, and most of the story is based on the observer watching the story unfold, so you don't feel cheated or lost by what happened-- and-- at the same time, a left hand turn becomes an elevator ride and you can think back, see how it happened, but it was not foreshadowed for the shallower reader.

The final story has the outside view of the action that is normally found in motion picture and television, and actually has the "meat" to be turned into a movie. It also has a structural device to allow sequels, something that is rare, and could be turned into recurrent repeat story reveals.

Simply, it is well written, for all the stories, and has both fishhooks and plot twists that seem logical and straightforward after you have finished the story.

I paid full price for it, it was not a freebie, and I am not buttering the author's ego when I say it is rare to see the reality shift being used as a plot twist but it is done right and works here. This is a real life very uncommon type of work. One warning: If you have trouble with plot twists and fishhooks, avoid this book.

Five out of five, straightforwardly put.