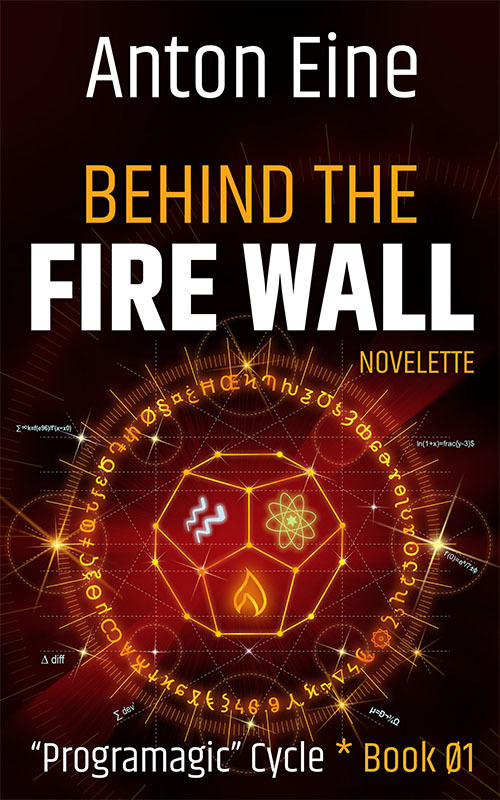 Behind the Fire Wall

When the Pentagonal Citadel's Fire Wall is breached as a result of a robbery, giving the perpetrators access to the most dangerous artifacts stored in the Vault, Magister Sajar Randhar finds himself in hot water.

His security clearance is pulled and he’s placed under house arrest for the entire duration of the investigation. But who could have hacked the most impregnable security system in the entire Murican Empire? How did they manage it in the first place? And why remove Sajar from the investigation instead of having him cooperate with the authorities?

The veteran mage is left with no other choice but to take the investigation into his own hands. The case is incredibly complex, but with his great experience and top-notch skills as a magic security specialist, there’s no better man for the job.

Review by Barb Taub of barbtaub.com

"If you’re reading this, I’m either dead or behind bars."

Author Anton Eine hooked me with that great first line. Then he set that hook and reeled me in. His bait? A tiny little taste, a prequel to his upcoming Programagic Cycle series, that introduces us to a disturbingly familiar magic world.

"You come to some support center and say your crystal ball doesn’t work. The mage at the counter examines your magical masterpiece, only to find all the code written in D-flat, or something even more obscure."

At least, it’s familiar to any of us who have wandered the aisles of Fry’s or Best Buy, tried to set up our own router, or attempted to understand anything a twelve-year-old child tells us. Or to anyone like me with a basement full of obsolete electronic relics of bygone days, and completely useless knowledge of forgotten programming languages like Basic. (VCR/Walkman/DOS anyone?)

Behind the Fire Wall is a beautifully deceptive little story, one that uses the technology rules we accept but for the most part don’t understand any more than if they were in truth magic. It’s as if the Apple Store had a Genius Bar in Diagon Alley. I love the dry background humor of the created world as much as the locked-room mystery Magister Sajar Randhar is attempting to solve.

Along the way, we meet a handful of surprisingly three-dimensional characters such as Spirit, the experimental and somehow self-aware hologram who owns the final, unexpected twist to the tale.

As with any prequel, this little story has one job—to set in motion the events that will propel the series forward, and most importantly, compel readers to look forward to that tale. Job well done.

Review by Karen Oberlaender of My train of thoughts on…

This book focuses on mage Sajar Randhar, magic security specialist, who is suddenly suspected of a – major security breach!

With “Behind the Fire Wall”, Anton Eine has created a thrilling short story that kept me glued to my E-reader. This short story comprises two believable characters with sufficient depth and dialogues that sometimes made me grin. I had a great time reading “Behind the Fire Wall” – it is a very thrilling read. I was drawn into the story right away, getting closer to Sahar and Spirit, page by page. I am looking forward to reading more!

This is for you if you like computing, science fiction, savvy protagonists, entertaining dialogue, as well as mysteries and thrillers.

A suspenseful and entertaining short story to read again; it is the very promising first in a new series.

The two main character are the narrator and his Spirit – an AI of his own construction, similar to a djinn. The narrator, Majister Sajar Randhar is under house arrest due to the successful hacking of his unhackable Fire Wall and the theft of secrets vital to National Security. From the confines of his home, he and Spirit discuss the situation, to try to puzzle out who might have breached the security, why, and – perhaps most importantly – HOW?!

The story ends on something of a cliffhanger; feeling like it is a setup for a new world of story-potential, rather than a standalone short story. Not much actually happens, but there is a wealth of worldbuilding information and character development that promise an exciting techno-mage adventure from this series… so stay plugged in for more!